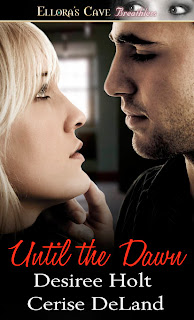 Award-winner Desiree Holt and I have penned a STEAMY thriller for you!
First in a series starring a team of female ops, UNTIL THE DAWN takes you on a big ride from Washington power circles to torrid Texas where the clues keep coming that someone near and dear is importing illegal arms. Maddie Sommers finds clues that lead her to the man responsible. Meanwhile, another man whom she had personally hired to help her with research is now discovering new facts about her...in her bed.
UNTIL THE DAWN, first in the Nemesis series at http://www.jasminejade.com/, debuts today.
Nemesis. Danger has new mistresses: Very special ops. By 2 award-winning authors of romantic suspense. You'll be thrilled.
(Buy link: www.jasminejade.com/ps-8497-50-until-the-dawn.aspx )

Looks like you two are having fun! Love the cover and the concept. Good luck!

THANKS, Delilah!!!! So glad you like!
A mutual admiration society, donchaknow.
cerise

Sounds exciting!! I just ordered your last breathless a few days ok so waiting on that one to come in, I'll get this one next.

Your the best Des!!