Hope your Christmas was wonderful! 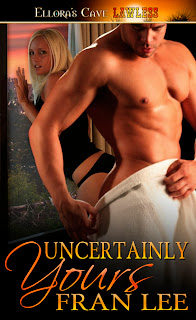 Uncertainly Yours
is now available over at Ellora's Cave!
Visit my book page for the blurb and the excerpt.  Since this is a PG-13 blog, I don't want to shock any readers. LOL!
The New Year is coming quickly and I have made my resolutions...submit at least one book every two months...get my lazy fanny busy. I have been so buried in other things, I have neglected my writing.  Time to get busy.
I am wondering, dear friends, why we are continuing this blog.  Only 35 posts have been left here in the entire year 2011.  So sad!  No one bothers to come over and comment or read other author's posts.  I have read all of the comments that have been left, and have deleted many of them that have nothing to do with the post, but have been advertisements left as "comments" by companies wanting to promote their own products...which have absolutely nothing to do with romance.  Sigh.
After this post, I am removing myself from membership on this blog group.  I am sorry, but there is so little interest in it, and we get NO exposure from it (except an occasional spammer) it appears to be of no value anymore.  Dee, Cerise, and those who have bothered to come and post, I salute you.  Contact me if you are truly interested in continuing to post here.
Hugs, and Happy Holidays!
Fran Lee
http://www.franleeromance.com
Posted by Fran Lee at 12:01 AM 3 comments:

Today I stood at the beginning of that rocky path—massive revisions to a contracted manuscript that has been waiting for months. I wasn’t avoiding the task. My editor and I had agreed to leave it alone until after the holidays. She had a pile of manuscripts to edit. I had a couple of stories to write for another publisher, so the delay worked for both of us.

Truth is, I started the revisions several months ago. Truth is, I had to fight myself not to focus on them, throw myself into them wholeheartedly. Discipline—which I usually lack—kept me intent on where I needed to be—on those two other stories.

Now…A prologue is drafted and I’m actually feeling the same anticipation, the same joy as when I wrote the story the first time.

But first… Yep, that second story I wrote for another publisher needs revisions before I can send it off. Hopefully, I can keep my enthusiasm for that one as I have for the one still sitting here…waiting.

The wonderful cover is for my December 15, 2011 release from eXtasy Books. It has a holiday there if you want a hot holiday gift for your significant other. Drop by my website to read an excerpt: deebrice.com.

Available on Kindle and Barnes and Noble  for your holiday fun! Only .99

Blurb:
Nick has fought his attraction to Emily since the summer. Work and other commitments have kept him from pursuing a relationship. Christmas is upon them and Nick finds he has free time on his hands. He devices a little plan to get her sexy body prepared for what he hopes will be a night of passion she’ll never forget.

Will Emily succumb to this Naughty St. Nick?

Emily pattered over to the front door. She peered through the peephole.

"Hmmm, I swear I heard the doorbell." She threw opened the door against the bitter cold of the winter storm brewing outside. Shivering, she bent over the threshold and glanced in both directions. Her skin pebbled from the snowflakes landing on her bare arms.

"Strange, I know the doorbell rang." She was about to close the door when she noticed a small brown box, sitting off to the right.

Intrigued, she placed a sock covered foot into the icy snow and retrieved the box. She quickly slammed the door and hurried back to her blanket on the couch. She nestled under the red fuzzy blanket. Turning the box in her hands she looked for an addressee.

She needed to know who sent it. Digging deeper into the box she searched for a card or anything cluing her in to who the sender was. She found a tiny note card that read:

On the first day of Christmas my true love gave me to, one butt plug a hummin’.

Emily thought she’d explode into orgasm right then and there. The idea of someone wanting to charge her ass to life enthralled her. Filled with an arousal that ran deep, Emily knew she had to pleasure herself.

Settling into the pillow she closed her eyes and pictured the guy from Six A, as the bearer of her gift. His wavy blond hair and those piercing green eyes charged her body. She’d fantasized about him a few times. Oh who was she kidding she masturbated to the image of his shit eating grin too many times to count.

Emily longed to run her hand over his taunt abs. She wanted to trace a finger along the vee that disappeared below the trim of his pants to see if it went down to his cock, which she knew would be large and bulging. It seemed hard to believe she’d been drooling over him since summer.

After she witnessed his body in scant clothing she wanted a piece of him. 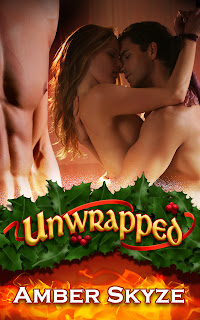 Meg Trainor has one wish for Christmas every year: Two men who will fulfill all her fantasies.


Santa's in a giving mood this year.

Brothers and co-owners of Turquoise Toys, Brad and Shane Griffin will give her a Christmas she'll never forget.
Posted by Unknown at 5:24 AM 2 comments: