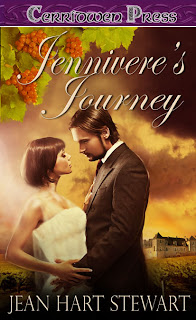 Wish I could greet each of you individually and extend my very good wishes. Xmas is such a lovely time of year. Not only can't do that, but I'm a little brain dead. Am polishing my book fifteen, one of the mage series, and this one is erotic instead of sensual. Have finished it, eliminated umpteen 'that's and almost as many 'was's. Always find it hard to believe I let so many sloppy words slip by me. In the last book I overdid the word 'truly' like I couldn't believe. I'll finish my lazy word check, give it to a friend for her edits, and then get it to my wonderful editor. Then I intend to revamp my webpage which is sadly out of date. Somewhere in there come Xmas, although we will only have our daughter to help us celebrate this year. She's so special she'll make it a merry one. And the first of the year I'll start the next book in the Mage series, this one about Simon Raphael. it will be about ten years later than any book I've written so will demand a lot of research.

Jennivere's Journey comes out the first of the year. This is the third book in the Songs of the Mages series. Here's a very short excerpt. Just enough to be tanalizing, I hope. And did you notice the title for this post rhymes?

"They walked for about ten minutes and then she stopped and turned to him.
Putting her hands on his shoulders she raised her face, lovelier than ever in the moonlight and said simply.
“Kiss me, Zach.”
He didn’t waste a second. His lips swooped down on hers. He tried to hold himself in check but these last few days of agonizing proximity had stretched his control to near breaking. He managed to soften his first blazing kiss but not before she’d gasped and tried to withdraw a little. Feeling her shock helped him gentle his lips and loosen his tightened hold. He stood rocking her in his arms and only when she relaxed did he let his kiss deepen and then gradually.
This time she drew closer, responding with an ardor whose innocence shook him. She’d been married, for god’s sake, even if only for two weeks. The more clues he had to her marriage the more suspicions it raised. He’d not ask her a single question. For one thing it was none of his business and for another he badly wanted her to confide in him because she trusted him.
Jenny wondered if the heat emanating from the man holding her so sweetly would set her dress on fire. She felt her body blazing from the ground to the topmost hair on her head. Probably this was what made her pant a little. She felt as if she could hardly get her breath."
It gets even better, or should I say sexier? I'm anxious for Jenny to make her debut. I won't be posting again before Xmas so Happy Holidays to one and all. Jean
Posted by jean hart stewart at 12:20 PM