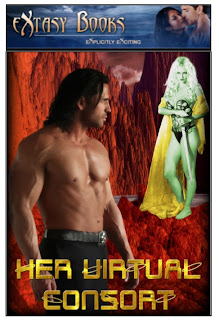 The cover is for the latest release in my Virtual Seductions series. It's available now from eXtasy Books.

If you haven’t seen True Lies or In the Line of Fire or visited the Westin Bonaventure in Los Angeles, CA, you may be unaware that the entire hotel is round. Which means you can’t get from one side of the lobby to the other without going around the bar area or through the elevator access to the guest towers. If you’re directionally challenged like I am, you may spend a lot of time going in circles. I did and have the blisters on my toes to prove it!

The other quirky thing about the hotel is the elevators only stop on lower floors 1, 3 and 5. To reach 2, 4 and 6 you take the escalator up or down. And if you’re looking for a specific place to eat—like Subway on level 6—you have to know to turn right when you step off the escalator. If you turn left—like I did twice—you take a grand tour of all the shops and eateries on the entire floor as you circle around and end up pretty much where you started.

Aside from that, signage on these “common” levels isn’t terrific. Finding some of the workshop rooms require advance planning or meeting someone who’s looking for the same place you are.

On the plus, plus side—there are plenty of places to sit and visit—something I found lacking in Columbus, OH (RT last year). Food and drink in the hotel were both expensive, but there were plenty of on- and off-site places that were lots less expensive. Starbucks and McDonald’s were across the street.

I had the privilege of sharing in Desiree Holt’s celebration of her one-hundredth release (Downstroke) with several other friends (Allie, Samantha, Cheryl and Laura). This charming, go-get-‘em lady (Desiree) introduced me to more e-publishers than I knew existed. Her kindness allowed me to pitch in the organized chaos that is Club RT. I have to say that’s the strangest place I’ve ever pitched, but I was asked to submit—my manuscript, Sam and Lex and all you other BDSM/GL authors—so it worked out really well.

Spent a little time catching up with sister Siren Caitlyn Willows and met Siren Treva Harte. Treva was in her Loose Id persona and I was pitching so our time together was very businesslike. I think the networking/catching up opportunities at RT are worth the costs of going.

Two new things at the signings this year. Graphic Arts/Novels and Teen Day. Authors/Contributors were in a separate area of the ballrooms. Reaction from other authors regarding this division was mixed, but I kind of liked it. I didn’t have to hide my more risqué covers from the under 18ers.

Did I mention it was cold and windy? So windy that getting on and off the glass elevators became a leap of faith—for me, at least. The wind blew straight up the elevator shafts (up pants legs and skirts, too). I couldn’t see the elevator sway, but I sure could imagine it! I’m rather proud of myself for even riding in a glass elevator. As long as I could hold on to the railing I did fine. And it sure beat climbing up and down twenty-four flights of stairs!

Would I go back to the Bonaventure? You bet! But I’m already planning for RT in Chicago next year and sending my thanks that it isn’t in July!

Oh, you may be wondering why I call this Wheels? Blessed are they who go round in circles for they shall be known as…wheels! 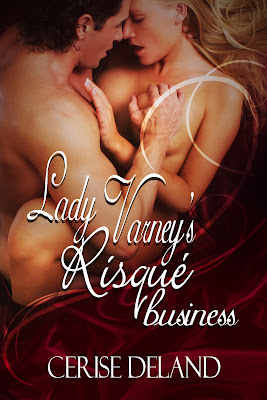 Come over to my blog today where you can post and win a big bag of goodies and books (mine and others'--all erotica!
Where? Here http://cerisedeland.blogspot.com
To celebrate my newest erotic Regency release, LADY VARNEY'S RISQUE BUSINESS over at www.resplendencepublishing.com, I am holding a very nice contest to win goodies. The takings include EC tote, EC playing cards, Wild Rose Press waterbottle, EC calendar, eye mask and more!
Rules?
There are rules:
1. Write and tell us all please why you prefer contemporaries or historicals as erotica to straight romance in contemp or historical period!
Also tell us the title of the book you have RECENTLY READ that you ADORE!
2. Post on my blog as a Comment: http://cerisedeland.blogspot.com
3. Do it today, Tuesday before 11:59 PM Eastern Daylight Savings Time!
4. Leave your email address so that I can notify you of the win!
I will pick a winner later on Tuesday 5.17.11, email you (and ask for your snail mail address)!
Ciao!
Posted by Cerise DeLand at 12:03 AM No comments: