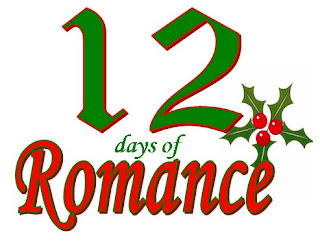 Do you want to win some fantastic holiday reading? If so come celebrate the Twelve days of Romance with 12 authors from Ellora's Cave, Total-E-Bound, Cerridwen Press, and The Wild Rose Press. Each day beginning December 8th and running through December 19th one of the twelve authors will tell what their "True love gave to them" on either their blog or website. Just check each of the sites until you find that day’s gift. All answers will remain posted once they are up, so there is no problem if you start a few days late. There will be three lucky winners. Collect all twelve answers and e-mail them to anny@annycook.com with 12 days of Christmas in the subject line to win some great books.
The prizes:
1st prize--6 books
2nd prize--4 books
3rd prize--2 books
All books and prize winners will be drawn randomly. 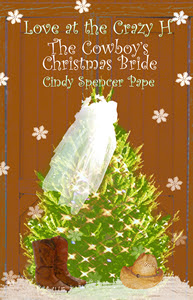 Here's a holiday sleigh ride excerpt from The Cowboy's Christmas Bride, available now in e-book and print from The Wild Rose Press. http://www.thewildrosepress.com/

Excerpt:
The combination of old-fashioned craftsmanship and modern technology was never more apparent than now, while Allison watched CJ hooking up a pair of sturdy draft horses to a beautiful antique sleigh. It would have been a scene straight out of a Courier and Ives painting,
except for the pair of bright yellow snowmobiles parked alongside the sleigh in the unheated “garage” portion of the barn.

CJ looped the reins over the front of the sleigh, and tied them loosely. “Want to go for a test drive?” he offered, walking up beside her. “The others won’t mind finishing up without us.”

She also wasn’t sure if spending time alone with CJ was such a good idea right now. Her stomach had been tied up in knots all morning, between coping with Trip’s flirting, the sisters’ matchmaking, and CJ’s seeming indifference.

“Okay,” she replied hesitantly, rubbing the nose of one of the huge gray horses. She’d gotten past her initial fear of them quickly. “What kind of horses are these?”

“Percherons,” CJ answered, handing her up into the sleigh, before opening the garage-style overhead door. “An old friend of my dad’s breeds them, and we’ve always kept a team for the haywagon and sleigh.”

“Do you ride them?” They were enormous animals, but then so were CJ and his brothers!

“No,” he chuckled. “I keep the quarter horses for riding and working the cattle.”
There were half a dozen or so of the slightly smaller horses in the barn, she remembered, including Belle, the pregnant mare. “Quarter what?”

He laughed, as he led the team out through the wide door, and Allison blinked at the bright sunlight glinting off the snow. “Quarter horses,” he explained. “It’s a breed, like poodle, or Labrador. Belle’s foal is my first attempt at breeding them.”

He climbed up beside her on the high seat of the sleigh, and Allison moved closer, closing the gap between them. It felt right, she decided. She resolved to ignore her doubts and enjoy the afternoon. With an expert flick of CJ’s strong wrist, the horses began to move. Allison was astonished by the tranquil beauty of the snow, the sunshine, and the musical clop of the Frisbee-sized hooves. Even more stunning, in her opinion, was the strong, quiet man who sat beside her.

“How are you holding up?” he asked finally. “Is everybody treating you all right? I know it’s a bigger crowd than you’re used to.”

She shrugged. “I’ll be okay,” she answered.

Neither of them spoke for the next several minutes, as CJ guided the team down the road away from both house and barn. Just around a bend screened by a grove of evergreen trees, CJ pulled the horses to a halt and turned to Allison. She looked up expectantly, certain that he was going to kiss her.

He didn’t. After staring at her for a few seconds, he turned and clicked his tongue at the horses, starting the sleigh moving again.

No answer. Allison shivered at the cold breeze as they moved across the snowy field. “Did I do something to upset you?”

“Of course not,” he replied.

She had to resist the urge to strangle him. Honestly, men could be such idiots! “Was it the book?”

“What?” His expression seemed genuinely confused for a second, then he shook his head, gave her a hint of a smile. “No, of course not. The book was fine.”

“I know I told you I hate lawyers. I hope you don’t think it was an insult, or anything,” she continued. “I wanted to find something more personal, but I didn’t have any idea where to look. The only time I was alone was at the bookstore.”

“Harry knew I wanted the book. It’s fine.” He didn’t sound fine, he sounded exasperated—for CJ. His face had gone funny when she made the lawyer remark, but she didn’t want to push him. Instead, she tried to bridge the gap physically. She leaned her head on his shoulder. “Thanks, CJ. For everything. The invitation, the gifts, but mostly for including me. This was the nicest Christmas I’ve had in years. Maybe forever.”

“I’m glad,” he rumbled, putting an arm around her waist. “Let me know if the rest of the clan gets on your nerves too much.”

Did he mean Trip? She thought he was jealous of Trip’s flirting, but she wasn’t sure, and she sure didn’t want to bring the subject up. She tried to hedge a reply. “I think they’re all very nice. Especially the kids. They’re so enthusiastic, though, it can be exhausting just watching them.”

He chuckled. “I know what you mean. I love having them visit, but I’ll be just as glad in a couple of days when they all go home.”

He seemed to be in a better mood now, so she was quiet for a few minutes, lost in the picture-book beauty around her. Then another nasty thought occurred to her, and slipped out of her mouth before she could stop it. “Is it about the mistletoe?”

He didn’t say anything, he just grunted. She took that as a yes. “You know I’m not interested in him, right?”

She pushed on. “Your brother is something else, but I’d never even think about taking him seriously. He flirts with every female he sees, even Rose. Besides, he only pays attention to me because it makes you mad.”

His voice dropped off and another terrible thought occurred to her. “Oh no! They don’t think I’m kind of—well—loose, do they?”

“What?” She could tell she’d surprised him, he straightened so quickly his shoulder jerked out from under her cheek. It took all her balance to avoid falling off the seat.

“I mean, I was engaged to somebody else just a few days ago. And now, I’m—I mean—you and I—” She was sure she was blushing now, and not just from the wind.

CJ pulled the horses to a halt again, then touched her cheek with one gloved hand, turning her face to his. “No,” he said simply, then dropped an exquisitely tender kiss on her cheek. “Nobody thinks that.” There was such fierce sincerity in his eyes and his voice, that she was compelled to believe him.

“Good,” she replied with a shaky smile.

“No, what they think is that you’d be perfect for Trip.”

“You’ve got to be kidding!”

He held up three fingers. “Boy Scout word of honor.”

She snorted out a laugh. “I can’t believe it. Even Fitz? He can’t stand me.”

CJ sighed. “Who know what he thinks? You’ve got to understand, Allie, Fitz has his hang-ups like everybody else. For Fitz, it’s women from the big city. He got his heart broken once, and he’s held a grudge ever since. But he’s not a bad person, Allie. He’ll come around.”

But would she still be here when he did? Allison had no idea. All she knew was that her feelings for CJ were growing with each passing day, and if she was going to leave Wyoming with her heart intact, she might need to do it soon. She opened her mouth to speak, but didn’t get the chance. CJ had swooped in for another kiss, and it was all Allison could do just to hang on.
Posted by Cindy Spencer Pape at 8:04 PM

What a great excerpt, Anny. I was right there with them. You nailed their emotions. Now I must read the book and find out what happened to Allison and CJ. Is this an EC book?