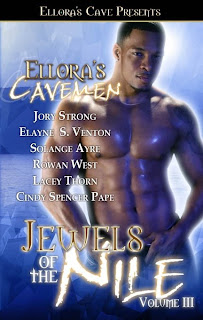 When Sorcerer Cian hears a siren’s song on a cool Toronto night, he has no idea his life is about to change forever. Lyra’s life has been a long cycle of loneliness and meaningless encounters with mortals. One night with Cian turns that life upside down. Can their night of passionate sex turn into a love that will last forever? Together they work to find a way, challenging even the gods themselves for their chance.

“Please!” She started to sway, caught herself by grabbing his shoulders. “I need you. Now.”

“Not yet.” He knew from the soul-gaze that she wasn’t in imminent danger, as long as she fed sometime tonight. Cian was nowhere near done playing. For some reason it was crucial to him that tonight be special, meaningful for both of them, rather than just mindless sex. He leaned her back against the boulder and dropped to his knees in the sand. “Spread your legs.”

Small but strong fingers threaded through his hair and gripped his scalp as she obediently widened her stance and let the rock bear the weight of her ass and lower back. Cian rewarded her with a leisurely lick along her gleaming cunt. She was as wet as the lake behind him. Thick cream coated his tongue and glistened on the skin of her upper thighs. Her pussy was smooth, with just two small tufts of damp silvery hair guarding her slit. He used his tongue to toy with the tiny curls and the edges of her puffy lips. Even in the moonlight he was somehow sure that like her nipples they were normally a pale shell pink.

“I could eat you all night,” he murmured. He blew a gentle puff of air along her heated flesh and she writhed, more warm wetness trickling onto his tongue. Ravenous for the taste of her, he licked along her opening. His tongue probed deeper with every stroke. Finally, he speared it up into her channel.

Lyra screamed and her thighs tightened down around Cian’s head. He smoothed them with his hands to ease them back apart. His tongue kept up the onslaught, thrusting rhythmically into her snug pussy. Every third or fourth stroke he paused to circle her erect clit. The tender nub poked free of its protective hood and hardened further with each moist swipe.

He knew she was close. Tremors began to course through her taut muscles. Her breathing was rapid and fractured and her cries had dissolved from words to whimpers. He slid his hands over the firm flesh of her thighs and used the tips of his fingers to part her pussy lips while both thumbs slipped into the entrance of her cunt. She was so tight they barely fit. He breathed in the heady fragrance of her musk and groaned. “Let go, Lyra. I want to watch you come apart for me.” His lips closed around her clit and he sucked at the same time he stroked inward with his thumbs.

“Goddess!” Her scream filled the night, crashed right along with the waves as she came. Her vaginal muscles clamped down around his thumbs and her hips bucked beneath his face. He maintained the suction until the ripples of her orgasm had faded then he soothed her with a series of slow thorough licks. Gasping raggedly she sagged against the rock. “Thank you. Now please—I need more.”

“Oh, we’re nowhere near through yet, leannan. That was just the beginning.”

“Your turn?” She stretched and made a sound that was nearly a purr. “I want to make sure you have fun too.”

“I have been,” he told her honestly, somewhat to his own surprise. He was never a selfish lover, but he’d never felt like this before—that his partner’s pleasure was far more important than his own. “Watching you respond to my touch is a pleasure.” That was an understatement. He’d nearly come in his trousers like an untried lad.

Look for Sorcerer's Song and five other FABULOUS stories by leading authors from Ellora's Cave in the new anthology!

Posted by Cindy Spencer Pape at 1:34 AM